TIA Mini Strokes and Me 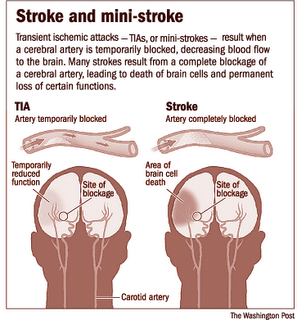 "A transient ischemic attack (abbreviated as TIA, often colloquially referred to as “mini stroke”) is caused by the changes in the blood supply to a particular area of the brain, resulting in brief neurologic dysfunction that persists, by definition, for less than 24 hours; if symptoms persist then it is categorized as a stroke. A cerebral infarct that lasts longer than 24 hours, but less than 72 hours is termed a reversible ischemic neurologic deficit or RIND.

Symptoms vary widely from person to person, depending on the area of the brain involved. The most frequent symptoms include temporary loss of vision; difficulty speaking; weakness on one side of the body; and numbness or tingling, usually on one side of the body. Impairment of consciousness is very uncommon. There have been cases where there have been a temporary paralysis of a part of the face and the tongue." (Information from Wikipedia)


I have had a at least one of these attacks during the past 10 years and last night I had at least one more. I started to feel "weird" on Sunday morning and by last night, I knew there was something wrong. These episodes can be quite scary, especially when you are the only one in the house, but being the survivor I am and the butt headed stubborn person I can be, I laid down and prayed, meditated until I could feel it easing off and then fell fast asleep as often is the case with a TIA mini stroke.

I hear you all out there telling me to go to the doctor and to take better care of myself (which I am doing). I know the risks associated with this disorder and am well versed on the back ground, forecast, and prognosis. I hear you!!! I appreciate your concern.

And while I appreciate your concern and love your friendship, I must be real with you.

I am a working woman.

I am a working woman who is trying to keep her job.

I am a working woman who is trying to keep her job, who doesn't have health insurance.

I am forced into a martyr role against my better judgement because the political powers that be decided that certain lives are more precious than others.

I can not afford to go to a doctor in the United States of America...what we call the "free world".

And to me...that is just a fact of my life. It literally breaks my heart.

Mr. Obama and the powers that be...does it break your heart as well?


Sending "Just the facts of My Life" love to you all,

Marlene
Posted by Unknown at 6:10 AM

I won't be redundant in the "take care of yourself" department.

I hear and get you about the insurance. My mom (who owns an auto repair shop - only 4 employees)....she makes to much to get "help", but can't afford her own ins.

Okay, so who do we write emails or letters to to get this turned around for you and so many others? You've done it for others, now let us do it for you.

My grandmother had this condition. I know it must be scary. Words seem inadequate!

I understand your plight.
Being that we are self-employed "contractors" we don't get any health insurance and pay $300 a month to cover our family.
But our health is good.
If we ever have health problems our rate will skyrocket. Then what would we do?
I'll just keep praying for good health for me, my family and you.
I hope you are okay.
-Della

this is just so frustrating! I'm sorry that this is your situation. The powers that be need to do something different. Please take good care of yourself...

Well, I don't know what to say other than if you have these TIA's, may they stay 10 years apart.
I work for a school district. Couldn't possibly live on what I make. I work for the health benefits. Before I started working, our H.I. had climbed to almost 2000 a month, and the coverage wasn't great. Now $300 comes out of my paycheck for 10 months - HUGE difference - and our coverage is superb - even covers any kids till their 25. BUT I could not live on what my take-home pay is. I'm working strictly for the bennies. And it sucks. (The job I actually like, just not the paycheck.)

Thinking of you, Marlene, and sending good health wishes your way. Watch that blood pressure!

I so hope that God is looking out for you. Bless your heart, your situation is awful. Take care of yourself and I will be keeping you in my thoughts and prayers

Marlene~
I'm not going to preach to you, but I do know from my graduate studies in speech pathology that TIA's can be warning signs of impending major strokes. PLEASE keep a close watch over yourself!

I am so very sorry to hear that your employer doesn't provide health insurance. That just isn't right! Oh, I could get really fired up about the subject, but I'll spare you and everyone else. I think most of us feel the same way about the subject.

You can guarantee that I'll be keeping you close in my prayers, my friend! Sending you big hugs and blessings!

I have what I call 'attacks' too. Not exactly like yours but scary just the same.

I'm sorry you don't have ins. He is working on it.

Scary stuff ... I am glad it seems not to have done any obvious harm to you and I understand how you feel about health insurance....sigh...I also dont understand Congress. These men and women have excellent healthcare bennies yet they refuse to come together to agree on a plan that helps the people who elected them.... I am not pointing any one party I am pointing at ALL of them, yes, those of them who were in office the last 8 yrs as well as the newbies .. enough is enough ..

Your condition sounds scarey. I was without med insurance for years, finally got a gov. job, sacrificing a higher salary for the benefits. People shouldn't have to do that.

Thanks for stopping by and your comment.
I am with the rest of the group here-- Stay alert with your health!

As for our 'fearless leader' of our nation? All I can say is: "Where is the GOOD changes that America needs?????"
I am of the mindset of Get with it or Get out!

Oh, Marlene! My heart breaks. Vol Fan and I were in the same insurance boat until just a few years ago.

We made too much for government ins but too little to be able to afford it on our own. It really sucks that to be a working, productive member of society and not be rewarded for it.

I remember the fear that something would happen to one of us. Just one surgery. Just one major illness would sink the boat!

I will be praying for you.

Have you checked into local assistance programs? We have a local program called Partners for Healing. They are geared specifically toward the working uninsured. Maybe there is something like that in your community.

It is a scary thing not to have insurance. We've been there before. No preaching - just love - and prayers!

Love ya, have a good week!

Marlene-The main reason I stay at my job is because of the benefits. I dont know where I would be right now if I had not had benefits when Cdub had his accident. A million dollars later I am still grateful for my benefits. So I hear you and it has to be scary w/o them. I do know there are local agencies that offer free health care. My sister gets them and I will check into it for you. Keeping you in my prayers sister and I am here for you as always.

I thank the good Lord above every day for our benefits. I am sending you all the best I can muster. Take good care my friend.

courage my friend. And good health....

We were without health insurance for several years as well. It's terrifying! As others have mentioned, check out your local programs for the working uninsured...better to have the info. and NOT need it, than the other way around.

Ohhh... I, too could get on the wagon of insurance and our lovely president. I WILL REFRAIN!!

More importantly is your health and well being. Your words show what good character you have, M. Please listen to your body...and take care of yourself.

This is when I think socialized medicine would be a good thing.

Take care of yourself hon.

Marlene I'll keep those prayers going your way. God is listening to you and everyone else. Trucker was just able a month ago to take out the coverage on the two of us. This is also one reason for the last few weeks we have eaten a lot of Ramen noodles. It runs us each week out of his check $150 or more. It's terrible. But I do thank my lucky stars we have it now. For many years we didn't.

We've had three friends who have had TIA's and it scared the hell out of them and us. It was life-changing for them. But then, they had good insurance.

There is something very wrong with this country when good, hard-working people are unable to afford insurance for life threatening health issues. What kind of company stresses you out on a daily basis and yet, doesn't have insurance for their employees? Something is seriously wrong with this picture, my friend.

Have you seen the movie 'Sicko'? It is a disgusting state that this country is in. Wanna charter a boat to Cuba with me? LOL! It could be fun. Really!

My prayers are with you sweetie. Hang in there and take extra good care of yourself!

Oh Marlene, I'm so sorry. I hope you're feeling better, sending you a huge hug and much, much love.

Shall not be redundant, but will hope that you are feeling better.
I know the misery of being unable to afford health care.
It stinks even more when every time you go, and shell out money that could have been used for so much more, only to hear.." hmmm need to run more tests, not sure whats wrong with you"
gaaaa, A pox on doctors and lawyers who make this world a stink hole.
grumble...
((((HUGS)))

I prayed for you last night after I saw your status on Facebook. Please do everything within your power to take care of yourself and I will continue to pray for you.

Around here there is a clinic for people just like you. It is in a great neighborhood and you aren't asked many questions when you go. I wish you could go just for peace of mind! I will pray for you today!

I really hope that things will change in America so people don't have to deal with the issue of no health insurance. It NEVER has made sense to me why in this great nation, we have the worst health insurance issues. President Obama is asking for stories just like yours to get Congress moving on this problem, I can send you the link if you are interested.